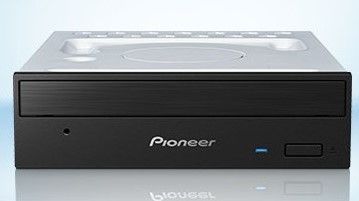 Against the grain of time and reason, Pioneer has launched an all-new optical disc player.

Pioneer’s all-new optical disc drive does more than just play Blu-rays, but will also be able to burn high capacity discs. According to its Japanese website (via Tom’s gear), the BDR-213JBK supports 16x recording speed on BD-R single and dual layer discs (up to 50 GB) and 14x recording speed on BDR-XL triple and quad layer discs (up to 128 GB) . That means you’ll be able to burn 4K Ultra HD Blu-ray discs at a decent speed.

For any confused youngsters who found their way to this page: PCs back then used optical disc drives which we used to install PC games, burn our silly playlists to CDs and even watch DVDs . The Pioneer BDR-213JBK hopes to find a place in your PC again so that we can start ripping old anime DVDs back to our hard drives.

This ODD supports over 20 different disc formats, from CD-RW to BD-R QL, which means you should be able to play any CD, DVD or Blu-ray in your collection that you have hidden in the attic. It even has a feature called PowerRead which claims it will let you read any disc smoothly, even if it’s dirty or scratched.

Pioneer says “demand for optical discs and optical drives is set to rise”, thanks to what it says is the “spread of telecommuting” and the growing need to store large amounts of work data and record calls of meeting. Although if Pioneer’s argument is that workplaces use more physical storage, why not just stick with external SSDs or even smaller USB drives?

Just over 10 years ago, we started to see pre-built gaming PCs phase out optical disc drives as download speeds increased, hard drives got bigger and people opted for digital versions of games as platforms like Steam became more popular. Music streaming services have also become more prominent, eliminating the need to burn our own mixtapes. So maybe Pioneer knows something we don’t. I applaud the optimism, however.

Right now, the Pioneer BDR-213JBK is only available for sale in Japan for around $150, which isn’t as expensive as we thought. Similar 12x record players like this usually cost around $120, so if you were looking for a way to digitize your Blu-ray collection, this might be something you should consider if it ever comes to the US.